The museum's permanent gallery features exhibits about the history of Sand Springs and life in an early 20th century industrial community.

If you haven’t been to the museum lately, you are in for a surprise. There are items to give you a glimpse of Charles Page's vision of an industrial community including surveying and office equipment, poultry farm, dairy, railway, dam, recreation at Sand Springs Lake Park, as well as personal family legacy stories.

The industry section includes the Power Plant (1911), Kerr Chimney Plant (1914), Cotton Mill and Green House (1940’s), Box Factory, Armco / Sheffield, and many other businesses who have come, gone, or stayed in the community over the last century.

The people section shows the diverse character of the community having athletes, doctors, performers, artists, educators, celebrities, photographers, politicians, and even an astronaut. The police and fire started as volunteers and acquired more modern uniforms and vehicles as the town grew. And there were things we did at church, events, and civic clubs.

Sand Springs is Oklahoma's only planned industrial town.  In 1907, entrepre 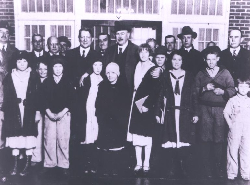 neur and oilman, Charles Page, sent Salvation Army worker Brinton F. Breeding and a group of orphaned children and widows to his land west of Tulsa to begin a children's home and widow's colony.  Building what some called a folly, Page developed a total community to provide for his children's home and widow's colony.  The museum's permanent exhibit chronicles the story of Charles Page, the Sand Springs Home and Widow's colony, and life in an early 20th century industrial town.

Please view our photo gallery for more photos of the museum.
[]